What is the project? What are you trying to do?

What we are doing is best explained by a picture:

We are taking Whitehead and Russell’s original Principia proof on the left, which is really a proof sketch omitting a lot of steps, and filling out the missing steps. For this we are using the interactive theorem prover Coq to ensure each proof step is a valid step according to Principia’s axioms and that no steps are skipped, even by accident. Finally, we are using the Coq encoding to typeset the full, gapless proof as it would appear in Principia’s notation.

Why are you doing all that?

Because it is fun. We also want academics and the public to engage more with Whitehead and Russell’s landmark three-volume work on logic and the foundations of mathematics. The project aims to facilitate that by producing a scholarly edition of Principia that is pleasingly typeset and searchable.

Are those the only reasons?

Are there any other reasons?

Yes. Principia has no editorial apparatus: there is no index of where starred numbers are used, no easily surveyable table indicating, for each starred number, what is cited in its proof. There is no dependency diagram indicating which chapters and sections depend on which other parts of Principia. So we want to illuminate the structure of the text by indicating these logical connections between different subject-matter areas. This construction builds on earlier scholarship: Sebastien Gandon, for example, argued that Principia does not embrace an arithmetization of mathematics (reducing mathematics to arithmetic, then reducing arithmetic to logic). Rather, different branches of mathematics are reduced to different logical kinds of relation in partial logical independence of one another. Gandon’s work convincingly shows this is how Whitehead and Russell proceeded; but the practical verification of Gandon’s thesis requires a clear view of the text’s logical dependency structure. This is one of the upshots of our work.

Are there any other, other reasons?

Detailed acknowledgments of obligations to previous writers have not very often been possible, as we have had to transform whatever we have borrowed, in order to adapt it to our system and our notation. Our chief obligations will be obvious to every reader who is familiar with the literature of the subject.

Given the developments in mathematics since Principia was published, Principia’s chief obligations are no longer obvious to readers familiar with the usual literature. Accordingly, we want to make perspicious and apparent to modern readers Principia’s intellectual ancestry (and debts). We will indicate the antecedents of Principia’s starred numbers in other texts (especially in contemperaneous nineteenth-and-twentieth-century mathematical works of Peano, Hausdorff, Frege, Cantor, Schroder, and Zermelo). The upshot will be a network mapping of the intellectual context for Principia that will be of use to historians of (late-ninteenth-century and early-twentieth-century) science.

Is that all you are doing?

No. Because we want to typeset Principia pleasingly, we are also creating a LaTeX package for typesetting Principia’s idiosyncratic notation, which is no longer included in standard typesetting engines. We have already published an early version of the principia package on CTAN that covers many of the notations occurring in Volume I of Principia. We will publish an updated package that allows for reproducing the entirety of Principia’s notations in due course.

Is there anything else you are doing?

We also want to create a subway-style map of Principia that allows one to click a theorem and see where it is used, what is used to prove it, and so on. One will be able to survey the text of Principia for the first time. So we are also marking up Principia’s theorems and proof sketches, and the Coq ones, in a Neo4j database. Then we will take the exported JSON file and use Python to enable user generation of various interactive maps and to export results of queries of the Neo4j database.

That sounds like a lot. What is your timeline?

It is definitely a lot. We plan (and would be very happy) to get Volume I re-typeset and published with its new editorial apparatus by 2025, which will be exactly one hundred years since Principia’s second edition was published. The timeline for re-doing all three volumes and adding their editorial apparatuses is partly dependent on whether our grant applications are successful. And the computer-assisted rewriting side of the project will follow the re-typesetting of the original work (although progress has already begun on that side of things, too).

Who is doing this?

There is a team of people involved in this project.

The principal investigator is Western Kentucky University’s resident logical atomist, Landon D. C. Elkind (Assistant Professor of Philosophy, Department of Political Science). The project began on September 1st, 2020, and was first undertaken while Elkind was a Izaak Walton Killam Postdoctoral Fellow in the Department of Philosophy at the University of Alberta.

Note: this advisory board is for the new critical edition of Principia Mathematica edited by the principal investigator (under contract with Cambridge University Press), not necessarily for other components of the Principia Rewrite project, e.g., the use of interactive proof assistants to reconstruct the proofs in Principia.

The Principia Rewrite project has a GitHub repository. Regular updates and the source code are made available there. Project milestones will be announced below.

Happy Hanukkah! We are happy to announce that Cambridge University Press has agreed to publish a critical edition of Principia Mathematica. This will be a beautifully typeset accurate edition that preserves the original work’s notations and proofs. The new edition will also include some new editorial material, including tables showing everywhere a given starred number is used and every starred number cited in a given theorem’s proof. There will also be contextualizing footnotes indicating antecedents of a given starred number or its proof in nineteenth-or-early-twentieth-century texts, which will make perspicuous the intellectual context for Principia.

We are also happy to announce that our project is growing! We have a new advisory board (see above) that will of course advise the editor on this project. And we also have our first intern with the project, Guanda Yuan, who will be helping us complete a Principia database in Neo4j. This database will be used to create the new editorial material, helping us map the dependencies and intellectual context for Principia’s Logicization of mathematics. Welcome, Guanda!

Finally, the typesetting of Volume I is about 38% complete (i.e. the informal introductions, the second edition material, and the entirety of Part I, §§A-B). We expect the entire Volume I to be completely typeset by the end of 2022. Stay tuned for more updates!

Happy International Workers’ Day! The source code for the verification of Principia’s propositional logic proof sketches in Coq has been updated again. Now all the proofs are forward-directed - steps in the proofs involve only transformations of premises - rather than backward-directed - steps in the proofs do not involve transformations of the theorem (or proof goal). Also, the conjunction Ltac Conj and the equivalence Ltac Equiv have both been updated to abbreviate the proofs. The code is now only 4,400 lines.

The source code for the verification of Principia’s propositional logic proof sketches has been updated. Many proofs have been rewritten with the Coq standard library’s modules on classical logic and classical logic facts: notably, the axioms of Principia have also been proven from these standard libraries. So assuming the Coq standard libraries and kernel are kosher, then all the propositional logic proofs are verified on that background system. See the Github repository for the updated code.

As of February 15, 2021, the Principia Rewrite project has also produced:

There are further developments to come: a high priority for the project is to build a map of the first five chapters (“starred numbers”) of Principia - because maps are fun and cool, besides being informative when done well.

If you have any questions, criticisms, or thoughts related to the Principia Rewrite project, write to landon dot elkind at wku dot edu. 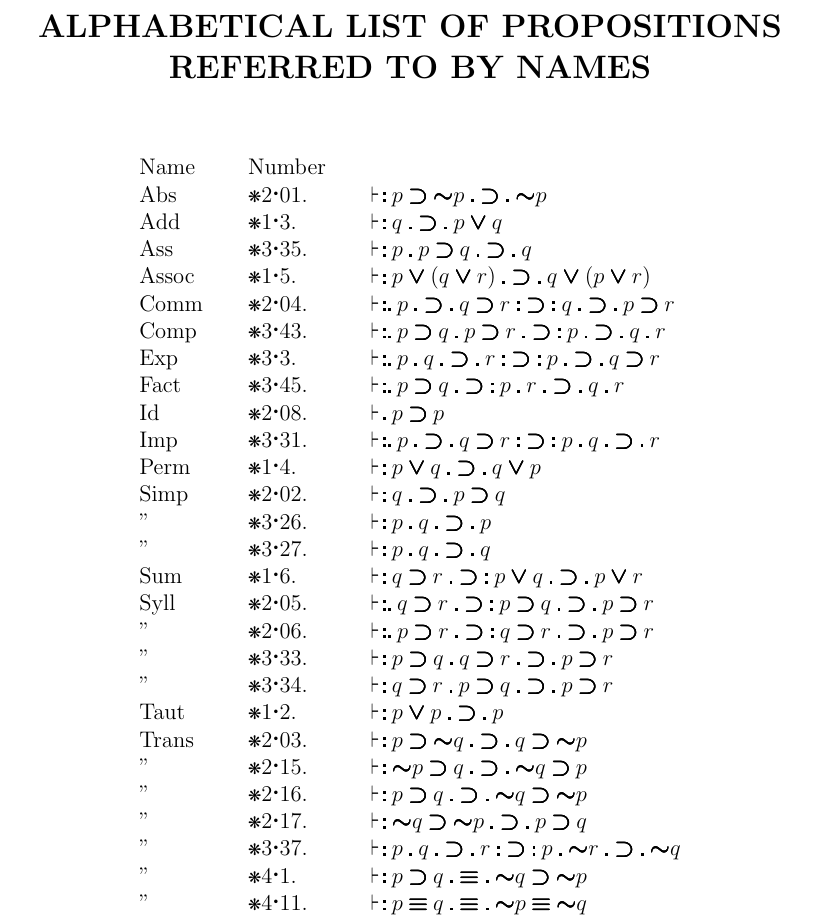